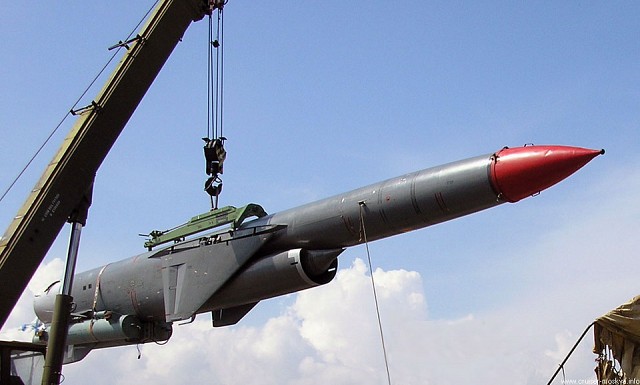 The P-500 Bazalt is a late Cold War era anti-ship missile of Soviet origin. The P-500 is a very large supersonic anti-ship missile that was specifically designed to engage aircraft carriers and their escorts far over the horizon. The P-500 arms a number of submarines and large surface combattants. In the West it is known under NATO reporting name "SS-N-12 Sandbox". The P-1000 Vulkan is a further development of the P-500.

The design of the P-500 is based on the earlier P-35 Progress (SS-N-3 Shaddock). The P-500 has a cigar shaped body with two swept wings and an air intake for the turbojet on the bottom. The warhead and guidance system are mounted in the nose. Solid propellant boosters provide initial velocity for the turbojet sustainer engine. The main differences between the P-35 and P-500 lie in the areas of propulsion and target acquisition. The P-500 flies much faster and has a longer range. Combined with the ability to be launched in a pack that coordinates target distribution its ability penetrate the air defence pocket of carrier battle groups is vastly increased.

Since the P-500 has a range far beyond the horizon the launch platforms requires target information from another platform. This can be a surface vessel, fixed wing aircraft or helicopter with target acquisition equipment. The missile itself uses inertial navigation towards the target area and radar homing in the terminal phase. The P-500 is believed to use passive radar homing at first and active radar homing before impact. An unique feature of the P-500 is the ability to exchange target information with other nearby P-500 missiles. A pack of P-500 missiles is able to distribute targets. Individual missiles can pop-up to provide up-to-date target information in the final stage.

The P-500 is a serious threat against surface vessels. It has a range of 550 km and flies at Mach 2.5 at altitude and Mach 2.0 in the sea skimming terminal phase. The warhead is either a 1.000 kg conventional or 350 kt nuclear warhead. The P-500 is difficult to intercept in the terminal phase. Its supersonic speed and low altitude leave a small engagement envelope. The main drawback of the P-500 is that it remains at high altitude is a large portion of its flight profile. This makes it vulnarable to interception by fighter aircraft and long range SAM systems. The improved P-1000 Vulkan and its successor the P-700 Granit (SS-N-19 Shipwreck) remedy this issue.

The capabilities of the P-500 come at the cost of its massive size and weight, high cost and eleborate associated infrastructure. The P-500 was first used by the Project 1143 Krechyet (Kiev) class aircraft carriers. Fourteen of the 29 Project 675MKV (Echo II) class submarines were converted carry eight P-500, while a single Project 651 (Juliett) class submarine was converted. The main application of the P-500 is on the Project 1164 Atlant (Slava) class. Eight banks of massive twin launchers are the main distinguishing feature of the Slava class. Over the horizon target acquisition and mid-course correction requires dedicated aircraft such as the Ka-25K (Hormone-B) and Ka-31 (Helix) helicopters and the Tu-95RTs (Bear-D) maritime patrol aircraft.

The P-500 and P-1000 were acquired only by the USSR. All were inherited by Russia when the USSR dissolved. Currently both P-500 and P-1000 remain in use on the Slava class heavy missile cruisers, although the P-500 is now considered obsolete.

A P-500 Bazalt missile on a trailer with wings in flight position.
Source: www.forums.airbase.ru - © copyright lies with original owner

The P-500 Bazalt is a very large supersonic anti-ship missile. It was first deployed in 1975 on the Project 1143 Krechyet (Kiev) class aircraft carriers. The name "Bazalt" is Russian for "basalt stone".

Externally the P-500 is difficult to distinguish from the older P-35 Progress and the improved P-1000 Vulkan. It must be identified by its launch platform. Since the P-500 is launched from a container the missile itself is rarely seen.

The P-1000 Vulkan is a further development of the P-500 and became operational in 1987. The name "Vulkan" is Russian for "volcano". The upgrades are focused on an increased range while retaining the same dimensions and launch infrastructure.

The increased range is achieved by a massive increase in fuel, while the weight of other components is reduced at the same time. The conventional high explosive fragmentation warhead is reduced from 1.000 to 500 kg and the metal body is replaced by a titanium one. The launch booster rockets use thrust vectoring in order to reduce fuel consumption of the main engine spent on initial maneuvering.

In theory the P-1000 has nearly double the range of the P-500. In practice the range is increased to 700 km since much of the fuel is spent at going to sea level in an earlier stage of the flight. This reduces its vulnerability from long range air defense significantly.

Development of laser guided "Vulkan LK" took place from 1987 - 1989, but was eventually cancelled. 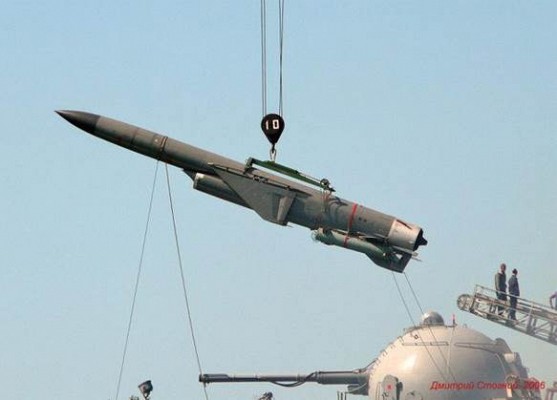 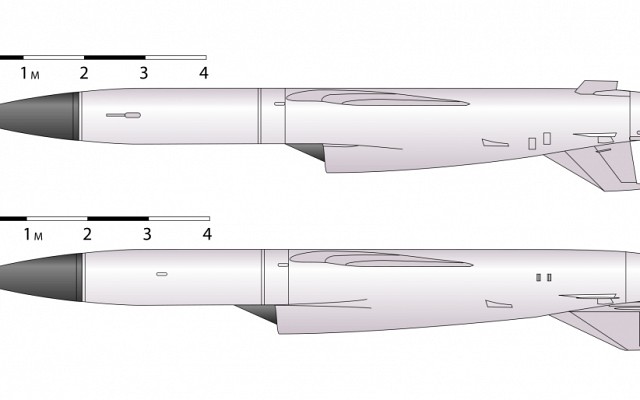 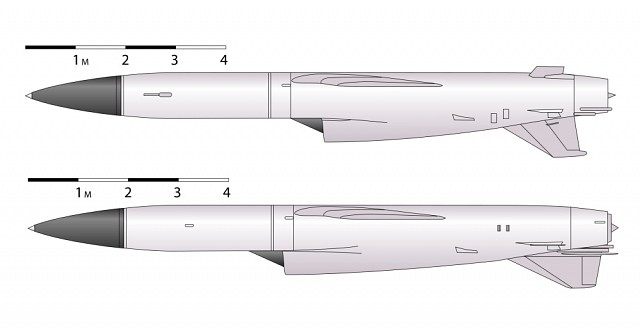 Line diagram of P-500 and P-1000 missiles. Note the difference in inlet position and tail wing. 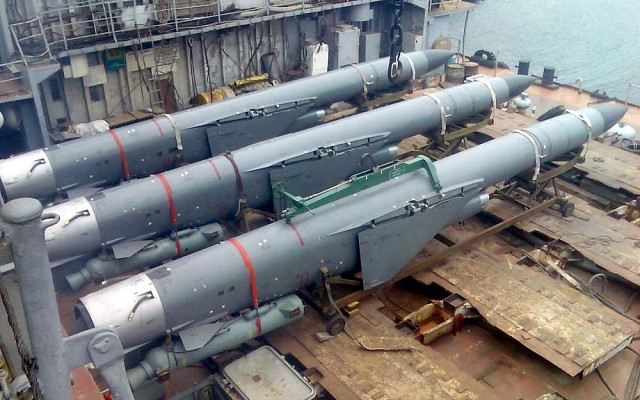 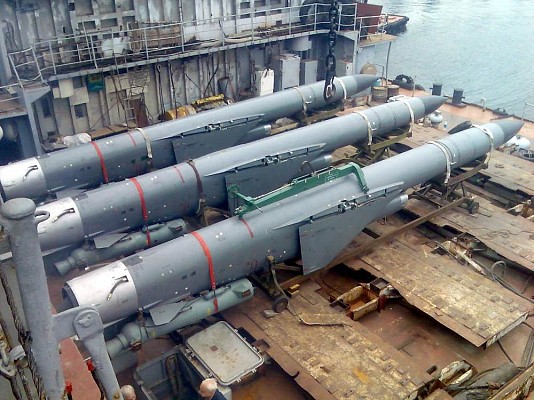 A number of P-1000 Vulkan missiles on a barge while being loaded onto a Slava class heavy missile cruiser. 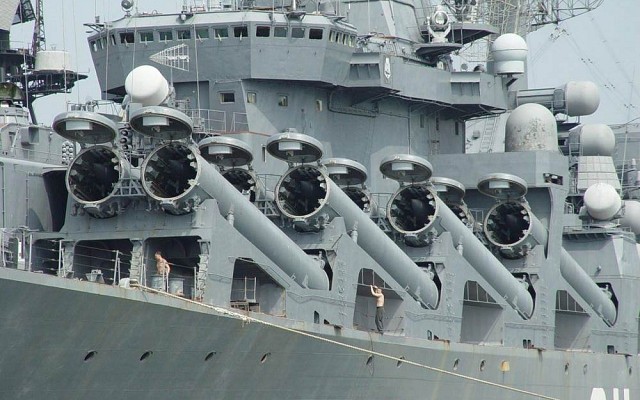 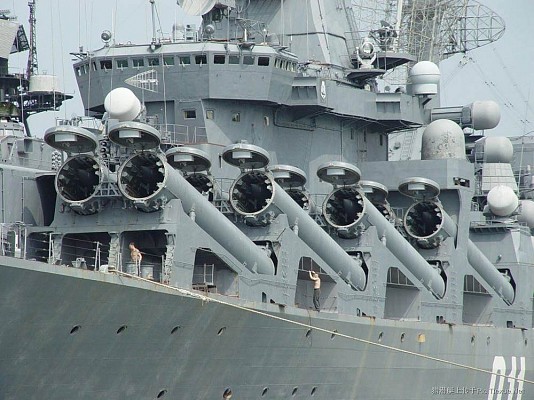 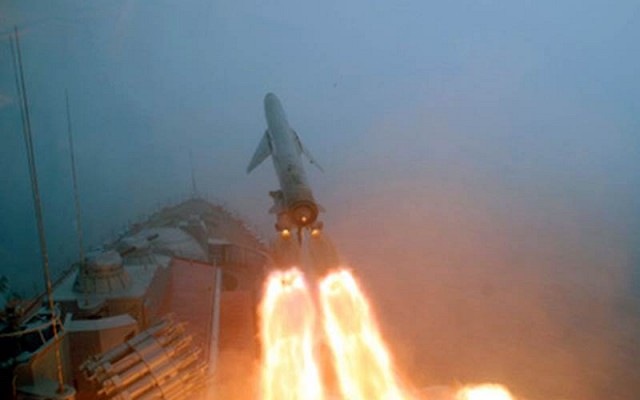 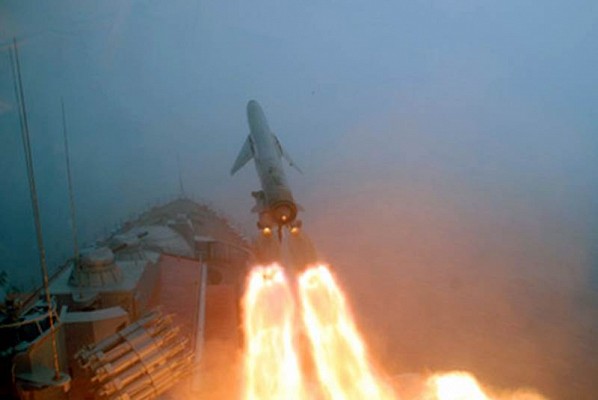 Test launch of a P-1000 missile from a Slava class heavy missile cruiser. Note that the wings are not yet in folded position. 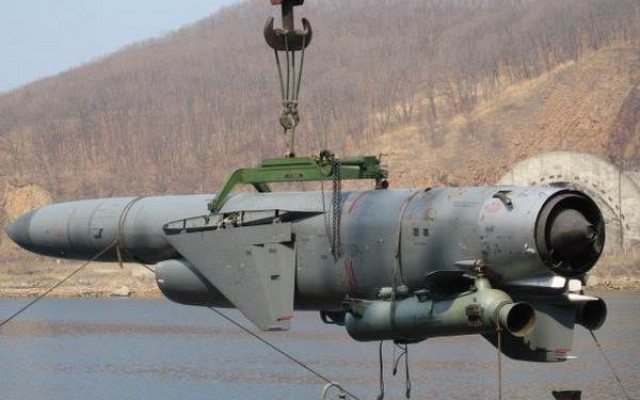 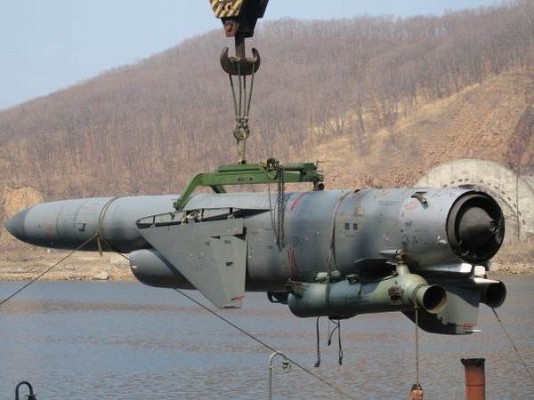 Rear view of a P-1000 Vulkan missile being loaded onto a Slava class heavy missile cruiser. 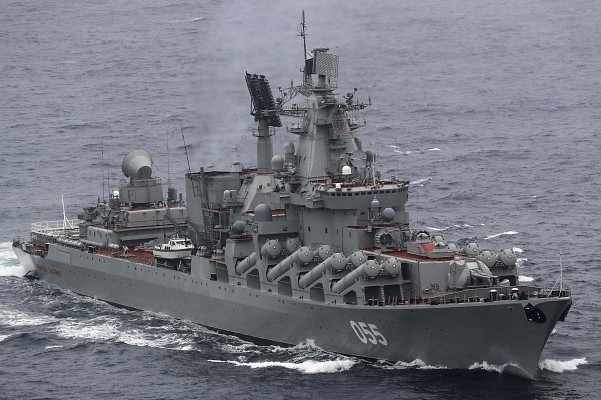